If a child comes to a clinic and is diagnosed with ADHD, about 30-40% of the time the child will also have ODD. Here are some examples of how this looks across ages: 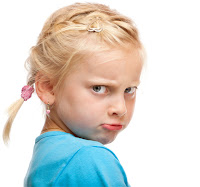 Kaylee begins her day by getting up early and making noise. Her father unfortunately has mentioned how much this bothers him. So she turns on the TV, or if that has been mysteriously disconnected, bangs things around until her parents come out. Breakfast is the first battleground of the day. Kaylee does not like what is being served once it is placed in front of her. She seems to be able to sense how hurried her parents are. When they are very rushed, she is more stubborn and might refuse it altogether. It would be a safe bet that she would tell her Mom that the toast tastes like poop. This gets her the first “time out” of the day.

In the mornings she goes to pre-school or goes off with her grandmother or over to her aunts. Otherwise Kaylee's mother is unable to do anything. Kaylee cannot entertain herself for more than a few moments. She likes to spend her time purposefully annoying her mom, at least so it seems. Kaylee will demand over and over that she wants something (e.g., play dough). She knows it must be made first. So her mom finally gives in and makes it. Kaylee plays with it about one minute and says, "Let’s do something" . Her mother reminds her that they are doing something, the very thing that Kaylee has been demanding for the last hour. "No, let’s do something else"

So after Kaylee's mother screamed so hard she was hoarse when her husband came home, Kaylee gets to go out almost every morning. At preschool she is almost perfect, but will not ever do exactly what the teacher wants. Only once has she had a tantrum there. Kaylee gets along with the other children as long as she can tell them what to do.

Her grandmother and Aunt all follow the same “time out” plan. This means she goes to a certain room until she calms down. The room is empty now at Kaylee's grandmother. Kaylee broke the toys, and they were removed. She banged the furniture around and it was removed. What sets Kaylee off is not getting to do what Kaylee wants. She screams, tells people she hates them, and swings pretty hard for a four old. After a half hour it is usually over, but not always. Kaylee will usually tell her mom or Grandmother about these tantrums. The story is always twisted a little. For example, Kaylee will tell her Grandmother that her mom locked her in her room because she was watching TV. Her grandmother used to believe these stories, and Kaylee could tell the whole story of how she was watching this show, and her mom just came in and dragged her to her room.

Now it turns out that Grandma doesn't think much of TV anyways, and so this made a certain amount of sense to her. This led to more than one heated argument between the Grandma and her mom. Of course there was almost no truth to this at all. It took the tables being turned for the Grandma to really believe that her Granddaughter could set up an argument like this. Kaylee came home and told her mom that Grandma let her eat four cookies and an ice cream cone for a treat and that she was very full. Kaylee's mom doesn't think much of treats, and could see how this might happen and thought she would have to talk to her mom. Finally they both realized what Kaylee was doing.

Most of the afternoon with Kaylee is spent chasing her around trying to wear her out. It doesn't seem to work, but it is worth a try. When she is at her aunts, she tries to wreck her cousin’s stuff. When is she good? When there are no other cousins around and she has the complete attention of her Aunt or Grandpa.

Kaylee loves the bedtime battle. She also loves to go to the Mall. But she never gets to go there or hardly anywhere else. She acts up so badly that her family is very embarrassed. Her mother shops and visits only when Kaylee goes to preschool. It is hard to know who is more excited about Kaylee going to school next year, her mother or Kaylee!

Toby is 10. Toby's day usually starts out with arguing about what he can and can not bring to school. His mother and his teacher have now made out a written list of what these things are. Toby was bringing a calculator to school and telling his teacher that his mother said it was alright. At first his teacher wondered about this, but Toby seemed so believable. Then Toby brought a little (Toby's words) knife. That led to a real understanding between the teacher and Toby's mother.

Toby does not go to school on the bus. He gets teased and then retaliates immediately. Since it is impossible to supervise bus rides adequately, his parents and the school gave up and they drive him to school. It is still hard to get him there on time. As the time to leave approaches, he gets slower and slower. Now it is not quite as bad because for every minute he is late he loses a dime from his daily allowance.

Once at school, he usually gets into a little pushing with the other kids in those few minutes between his mother's eyes and the teacher's. The class work does not go that badly now. Between the daily allowance which is geared to behavior and his medicine, he manages alright. This is good for everyone. At the beginning of the school year he would flip desks, swear at the teacher, tear up his work and refuse to do most things. Looking back, the reasons seem so trivial. He was not allowed to go to the bathroom, so he flipped his desk. He was told to stop tapping his pencil, so he swore at the teacher.

Recess is still the hardest time. Toby tells everyone that he has lots of friends, but if you watch what goes on in the lunch room or on the playground, it is hard to figure out who they are. Some kids avoid him, but most would give him a chance if he wasn't so bossy. The playground supervisor tries to get him involved in a field hockey game every day. He isn't bad at it, but he will not pass the ball, so no one really wants him on his team.

After school was the time that made his mom seriously considered foster care. The home work battle was horrible. He would refuse to do work for an hour, then complain, break pencils and irritate her. This dragged 30 minutes of work out to two hours. So, now she hires a tutor. He doesn't try all of this on the tutor, at least so far. With no home work, he is easier to take. But he still wants to do something with her every minute. Each day he asks her to help him with a model or play a game at about 4:30.

Each day she tells him she cannot right now as she is making supper. Each day he screams out that she doesn't ever do anything with him, slams the door, and goes in the other room and usually turns the TV on very loud. She comes up, tells him to turn it down three times. He doesn't and is sent to his room. She calculated that she has made about 1500 suppers since he was five years old. Could it be that they have gone through this 1500 times? She decides this is not a good thought to follow through. After supper Toby's dad takes over and they play some games together and usually it goes fine for about an hour. Then it usually ended in screaming. So Toby's grandmother had the bright idea of inviting them over for desert at about 8:00 pm most nights. But what about days when there is no school? Toby's parents try very hard not to think about that.

Courtney is 15. She is in ninth grade, and from her grades, you would say there is no big problem. She is passing everything, but her teachers always comment that she is capable of much more if she tried. If they gave marks for getting along with others, it would be a different story. Courtney's best friend is currently doing a 6 month sentence for vandalism and shoplifting. Courtney and Robin have been friends since fall, if you can call it that. Since Courtney has almost no other friends, she will do anything to be Robin’s friend. At least that is what her parents think. Courtney thinks it is "cool" that Robin is at the MCYC Youth Center. One sign of this friendship was that Courtney almost always gave her lunch money to Robin. Why? Because Robin wanted it. Courtney thought that Robin was her friend, but everyone could see that Robin was just using her.

What seemed saddest to Courtney's parents is that Courtney could not see this at all. But this was nothing new. She would make a friend, smother them with attention, and that would be the end of it. Or, the friend would not do exactly what Courtney wanted and there would be a big fight, and it would be over. But mostly Courtney complained that everyone bugged her. What seemed to save Courtney was the nursing home. Somewhere along the way Courtney got involved working there. To hear the staff there talk about her, you would never guess it was the same girl. Helpful, kind, thoughtful - they couldn't say enough good about her. In fact her parents joked that maybe if they all moved to the nursing home, it would stop the fighting at home.

They figured it out when another teenager volunteered to help one of the same afternoons as Courtney. Unfortunately the "other" Courtney came out. She was tattling, annoying, disrespectful and hard to get along with. Courtney could get along with any one, as long as they weren't her age, a teacher, or a relative!